The Retail payments strategy of the eu: rising ambitions

The European Commission has recently published its Retail Payments Strategy. Let’s get into it right away: the Commission is very ambitious and would like to see pan-European payment solutions rather sooner than later. The new ambition levels of the heads of government of the EU, displayed in the negotiations of the last few weeks, to invest billions of euros in the European economy, seems to have triggered a new momentum amongst EU officials. The EU could and should become world champion in innovative technologies, a.o. in digital payments.

The Commission focuses on four pillars: 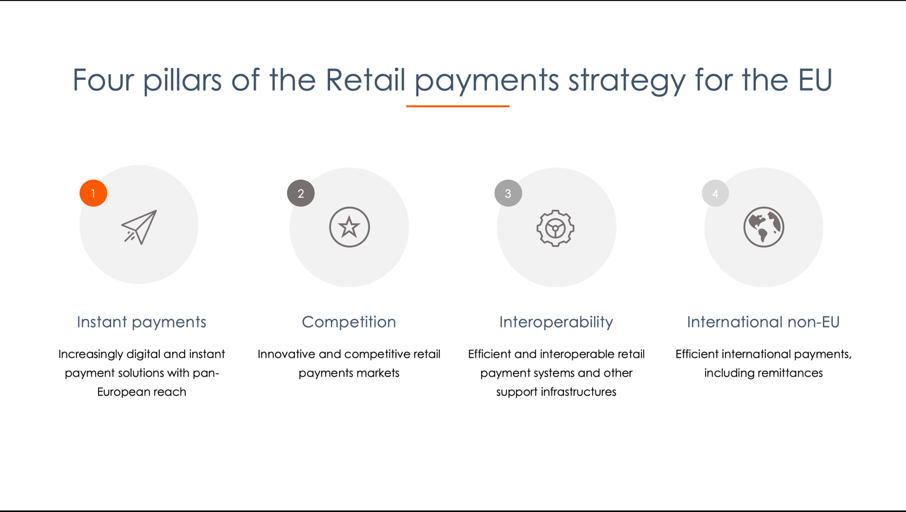 The first pillar is all about instant payments as the new normal. This is the most extensively described pillar. Going from 1 to 4, the pillars are less elaborated and, in our opinion, softer. Our conclusion from closely reading the strategy document is, that the Commission first and foremost prioritises the development of a pan-European infrastructure, for a large part based on instant payments, over the opening up to global markets. Although connectivity with the Global Payment Initiative (GPI) of SWIFT is mentioned as one of the recommendations to PSPs, this does not sound as an imperative advice.
The question is: how will we ever get a serious home grown European payment infrastructure if it cannot support global payments? Perhaps the Commission sees it in the long run: focus first on achieving standardisation in Europe with instant payments as a strong alternative to established card schemes.

We have summarised the key takeaways of the Retail Payments Strategy, based on the proposed actions. A little disclaimer: we did not include all of the actions, only the ones we feel most important. Furthermore, many of the proposed actions take the form of planned evaluations and foresight studies. For the sake of readability, we have shortened these actions to reflect the objective of the exploration.

The Retail Payments Strategy clearly aims at making the EU payments infrastructure more standardised, more efficient, more beneficial to European citizens and businesses and less dependent on non-European retail payment schemes. Overall, the EU payments environment is highly complex, with a plethora of both domestic and pan-European initiatives. The Commission seeks to reinforce SEPA and strengthen innovative and truly pan-European solutions, with instant payments as its most striking figurehead, to foster economic growth.